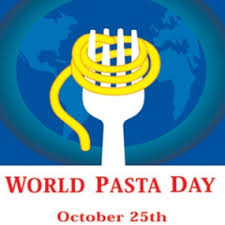 Which food is as Italian as the drink Prosecco DOC? Pasta of course! The 25th October sees the celebration of this truly Italian food! Since 1995 World Pasta Day has been celebrated across the globe to demonstrate the uniqueness of pasta as a food.  It is consumed in 5 continents, is appropriate for a healthy lifestyle and is a versatile and ingredient capable of reaching many targets.

Pasta is an ancient food, almost as old as prosecco and the first written reference is from 1154 in Sicily. Slightly later, an early 5th century cookery describes a dish called lagana that consisted of layers of dough with meat stuffing, a predecessor of modern-daylasagna! Thanks to the fact it could be easily stored dried pasta became popular in the 14th and 15th centuries, pasta was  stored on ships for voyages around the globe and the discovery of the new world.

There are over 600 types of pasta around but did you now that it is the shape dried pasta that gives its name? For example:

With all your new pasta knowledge, lets celebrate World Pasta Day with a delicious bowl of fresh pasta and a glass of Follador Prosecco!  Two of the finest Italian foods to complement each other.