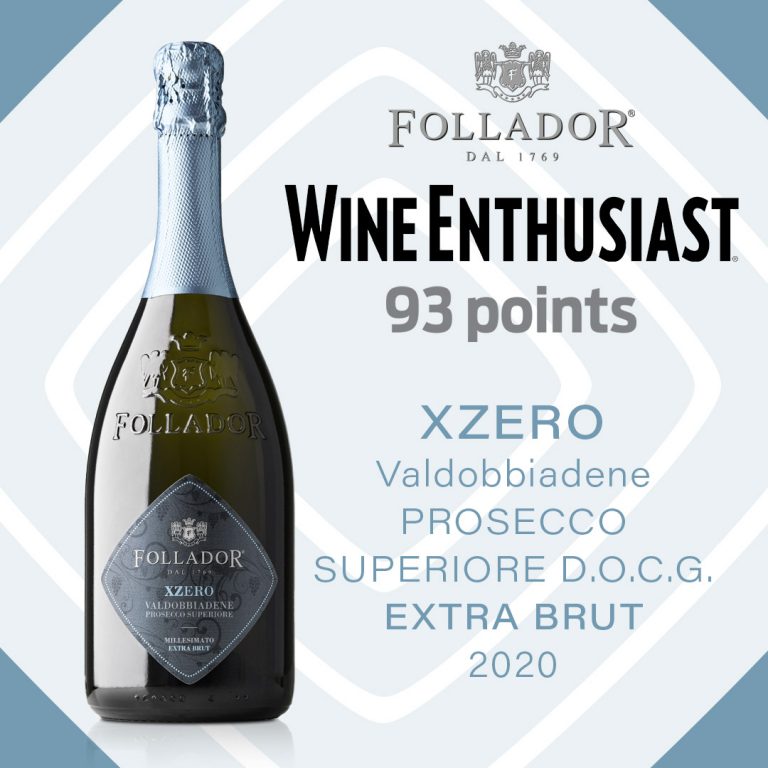 Follador Prosecco dal 1769 has received another important international recognition. The recipient of this great distinction is XZERO Valdobbiadene Prosecco Superiore Millesimato D.O.C.G. Extra Brut, which has been awarded 93 points by Wine Enthusiast, one of the most authoritative trade magazines in the world.

The rating from Wine Enthusiast, the prestigious magazine headquartered in New York with 30 years’ experience reporting on the top wines and spirits around the world, is an outstanding result for Follador Prosecco dal 1769.

It puts the company from Valdobbiadene up among the top wine producers, with the 93/100 score awarded to its XZERO Valdobbiadene Prosecco Superiore Millesimato D.O.C.G. Extra Brut, whose name refers to its standout feature – the fact that it contains no added sugar.

The recognition for the company was given by the Italian Editor Kerin O’Keefe, who assigned the favorable score. Wine Enthusiast’s team of reviewers tastes over 24,000 wines from all over the world every year: from France to California, Australia to South Africa, Argentina and beyond.

“We’re thrilled with this latest achievement – said Cristina Follador, the company’s Sales & Marketing Director – over the past couple of years our awards have given us huge satisfaction, making all our sacrifices worthwhile, with our great teamwork and our family’s sense of collaboration: the pursuit of this single goal is what brings us all together, it is what we share”.

The history and tradition of the Follador family are inextricably bound to their vineyards in Col San Martino, located in the heart of the Prosecco Superiore production area and lovingly tended for over two hundred and fifty years by one generation after the next.

The company’s story began when its ancestor Giovanni Follador decided to convert all the land he owned into vineyards, heralding the beginning of a success story which began in 1769 with the official recognition of the quality of the wines by the Doge of Venice Alvise IV Mocenigo and continues proudly to this day.

It is this awareness of being part of something great which gives siblings Michele, Cristina, Francesca and Emanuela Follador a deep sense of belonging to both their area, now a UNESCO World Heritage Site, and the world of winemaking. Wine is in the family’s DNA, along with an appreciation of this wonderful land, nestled between Venice and the Dolomites, and the excellence of its Prosecco D.O.C.G.

The ratings are finally online! You can find them on the Ratings section of Wine Enthusiast’s website.